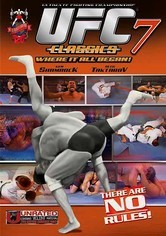 1995 UR 1h 58m DVD
Boxing, wrestling, ju-jitsu, tae kwon do and other fighting styles collide in the ring in this exciting volume of Ultimate Fighting Championship matches, highlighted by a bout between Ken "The Rock" Shamrock and "The Russian Bear" Oleg Taktarov. Brazilian fight master Marco "The King of the Streets" Ruas is also shown in all his bare-knuckle glory in an exciting segment. Other contestants include Paul Varelans and Remco Pardoel.