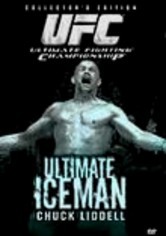 2006 NR 1h 1m DVD
He may hail from California, but in the ring he's "the Iceman": Mixed martial artist Chuck Liddell demonstrates why in this profile that tracks his ascendance to martial arts dominance and the 2005 UFC Light Heavyweight Championship crown. In exciting, often brutal footage, Liddell displays the ferocious striking ability and superior submission and grappling tactics that have allowed him to take down many an unfortunate opponent.