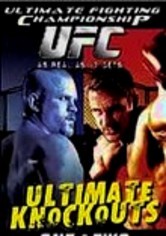 2006 NR 1h 15m DVD
The fourth round of UFC's "Ultimate Knockouts" series pulls absolutely no punches. With action-packed highlights from 2004 and 2005, this collection features some of the most punishing knockouts in the long bloody history of UFC. Bouts between some of the biggest and boldest figures in the sport include Chuck Liddell, B.J. Penn, Paul Buentello, Andrei Arlovski, Georges St. Pierre, Dave Terrell and Nick Diaz.