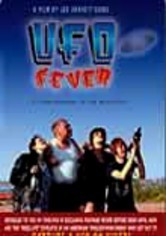 2003 NR 1h 11m DVD
Leaving their New Jersey home to capture the existence of space aliens on camera -- and to collect a $1 million prize -- the Ganes clan vanishes and is never heard from again. Shot in the vein of The Blair Witch Project with an improvised script and a premise that the movie is compiled from "recovered" footage filmed by the Ganes family, this 2003 comedy lampoons two of America's favorite obsessions: money and UFOs.