Ulysses Against the Son of Hercules 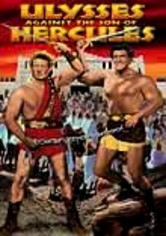 Ulysses Against the Son of Hercules

1961 NR 1h 39m DVD
Sent by the gods to capture Ulysses (Georges Marchal) for blinding the Cyclops, Heracles (Mike Lane) relentlessly pursues his quarry until they end up on a far-flung island, where they're forced to unite against an army of grotesque birdmen and their malevolent queen (Dominique Boschero). Gianni Santuccio also stars in this Italian swords-and-sandals yarn written and directed by cult filmmaker Mario Caiano.