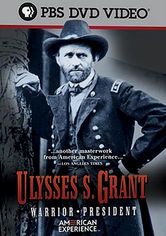 2002 NR 3h 33m DVD
Ulysses S. Grant was one of America's most paradoxical leaders. The greatest hero of the Civil War, Grant was a brilliant military strategist who rose from obscurity to George Washington's former rank. Propelled into the White House by his battlefield success, Grant lacked the political skills to deal with reconstructing the South and managing the nation's rapidly expanding economy, and his life after the White House was filled with disaster.