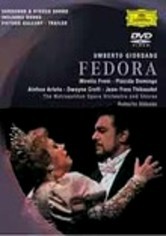 1993 NR 1h 53m DVD
Soprano Mirella Freni sings the title role opposite famed tenor Placido Domingo in this 1993 production of Umberto Giordano's opera "Fedora," recorded live at the Teatro alla Scala in Milan, Italy. Set in Switzerland, Paris and St. Petersburg, Russia, at the end of the 19th century, the work deviates from traditional operatic structure in that it consists mostly of vocalized, agitated conversation and contains only one aria, "Amor Ti Vieta."