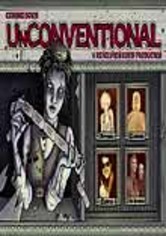 2004 NR 1h 39m DVD
Go behind the scenes of one of the largest horror gatherings in the world with this documentary that captures the madness and mayhem of the 2005 Chiller Theater Convention. Horror icon Gunnar "Leatherface" Hansen (Texas Chainsaw Massacre), scream queen Tiffany Shepis, low-budget filmmaker Bob Gonzo and two rabid fright fans host this cutting-edge look at the horror film industry, from the genre's top stars to its goriest special effects.