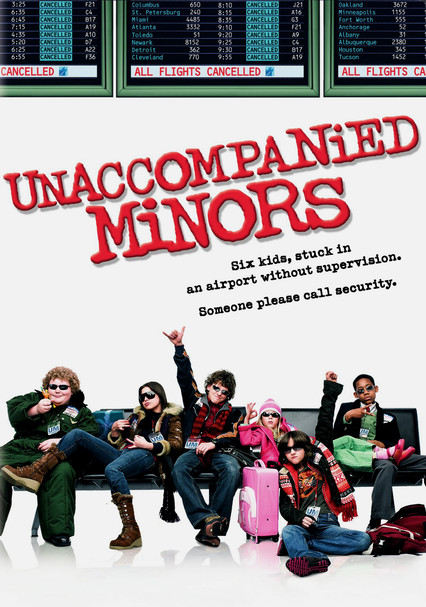 2006 PG 1h 30m DVD
Five disparate kids, snowed in at the airport on Christmas Eve, learn some lessons about friendship when they launch a bid to get back to their families and outsmart a disgruntled airport official who wants to keep them grounded.

Parents need to know that although this film is relentlessly dumb, kids -- especially those who like slapstick violence and watching other kids outsmart adults -- will probably want to see it. (That said, during one preview screening, after about 30 minutes, a 6- or 7-year-old asked his mother if they could please go home.) The stranded kids misbehave both with and without adult supervision, throwing candy and toys, destroying furniture, and piling on top of the man assigned to watch them. They order food they can't pay for, steal a motorized cart, steal items from abandoned luggage, let loose a caged dog, sneak out of the airport, and watch as adults fall, crash, and rage (a chase on sleds/rafts leads to a crash and one man's bloody and bruised face). An aunt drinks herself into unconsciousness (played as comedy), and a boy finds a bra in a suitcase where he's trapped. Some minor name-calling.

Early, brief scene has a rich girl sitting in an older male model's lap to show that she's experienced and provocative -- later, she's revealed to be sweet and naive; minor flirting between kids; flight attendants discuss pilots as potential mates ("Not too late for a fifth husband!"); a boy finds a bra in a suitcase where he's trapped (and comments "Not so bad in here").

Lots of silly slapstick stuff. Repeated punches and hits to crotches (at least four); children misbehaving in the waiting room throw candy and other objects at one other and adults; kid's face smashed by inflatable life vest (plus other equipment-related abuses); kids stuck in and on top of suitcase are bumped and banged during a ride on the luggage conveyor; man knocked over by pop-up Santa lawn ornament; chasing and banging throughout airport hallways/tunnels/floor areas; chase down snowy hill (on sleds, canoes, etc.) leads to smashing into trees and over cliff (Porter's face is bruised and bloody; later he appears with bandages); caged dog growls menacingly; guards play musical chairs and slap each other when they lose.

Frustrated with being stuck at the airport and angry at their absent parents, kids misbehave. Stereotyped Mexican airport worker.

Drinking to drunkenness by Aunt Judy (very disheveled on the morning after).