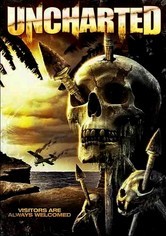 2009 NR 1h 18m DVD
When their private plane crashes in the Gulf of Mexico, a documentary crew makes it to a remote island, where they spend their days in paradise while waiting for rescue. But something else is on the island, an evil, inhuman force out for blood. This terrifying film is a collection of the crew's videotapes, found months later, that capture the carnage as it happened. Demetrius Navarro, Frank Nunez, Erlinda Orozco, and Shana Montanez star.