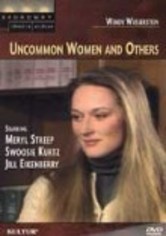 2002 NR 1h 30m DVD
Meryl Streep, Jill Eikenberry and Swoosie Kurtz co-star in this TV adaptation of playwright Wendy Wasserstein's acclaimed theater debut, an ensemble piece examining the lives of five friends coming of age in the shadow of the women's movement. Based partly on Wasserstein's own experiences, the play chronicles the women's reflections on their experiences as students at an exclusive women's college, where they were groomed for "gracious living."