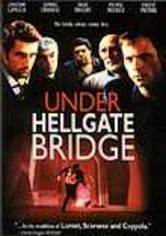 2000 R 1h 27m DVD
Money, drugs and guns make a potent combination around New York City's Hellgate Bridge, winner in 2000 of the "Regal Cinemas Dreammaker Award" and "Best Film" at the Nashville Independent Film Festival. Fresh out of jail after being wrongfully imprisoned, Ryan (Michael Rodrick) discovers he's still in love with his ex, Carla (Jordan Bayne), now married to Vincent (Jonathan LaPaglia). Soon the two men are in a battle over love and control.