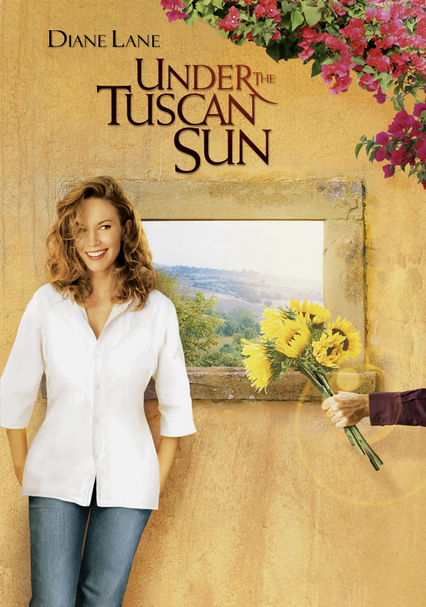 2003 PG-13 1h 53m DVD
After divorcing her cheating husband, Frances Mayes tries to overcome her depression and writer's block by taking a vacation to Tuscany. Charmed by the location, she impulsively decides to buy a villa there.

RomanceRomantic ComediesRomantic DramasDramas Based on Bestsellers

Parents need to know that this adult story of grown-up entanglements and expectations isn't too likely to engage kids or teens. A few scenes include partial nudity; others depict sexual foreplay, passionate kissing, embracing, and playful post-sexual behavior. Language includes one use of "f--k," several forms of "s--t," and a few other words. Not surprisingly for a movie set in Italy, the characters enjoy wine freely (mostly while eating), and background characters occasionally smoke cigarettes. The supporting cast includes a number of gay and lesbian characters, including the main character's best friend. The movie avoids typical Hollywood stereotypes when it comes to these characters.

Some partial nudity in several scenes: An eccentric woman wearing only a strategically placed feather boa poses for a semi-nude artist; a couple engaged in passionate sexual foreplay begin to undress; a teen couple is seen briefly partly hidden by bedding while in the throes of lovemaking. The main character's proposal of a sexual liaison with a new acquaintance is followed by non-graphic sequences of foreplay and post-sexual romantic behavior.

A loud, threatening storm and the startling appearance of a harmless snake frighten the main character.

The movie's main message is that engaging in life brings opportunities for new experiences, second chances, and recovery from even devastating wounds of the heart. It also promotes the ida that trusting yourself in new placesand sometimes making unexpected choices can be beautiful and rewarding.

Characters drink wine and some liqueurs on many occasions, particularly at meals and in social situations. In one scene, an intoxicated woman cavorts in a fountain. Several European characters smoke cigarettes.