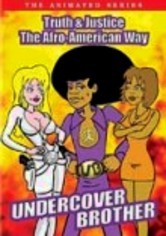 2004 NR 1h 0m DVD
This groovy cartoon series has a most unusual superhero: the funky hep cat Anton Jackson, an unassuming black man who keeps his cool. But when there's trouble from The Man, Jackson fights for truth and justice in the "Afro-American way" as Undercover Brother (voiced by Anthony Williams). Included are interviews with creator John Ridley, animator Bryon Carson and Eddie Griffin (who stars in the live-action version of the film).