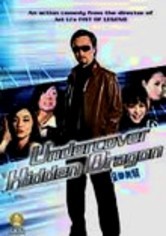 2006 NR 1h 39m DVD
Although the film is a parody, the action is real in this gangster comedy from Hong Kong directors Gordon Chan and Dante Lam. When small-time goon Fat (Ronald Cheng) loses his memory, he convinces himself he's an undercover cop. In turn, two sexy cops convince him that he must now go after his old boss, Big Bro. But instead of ratting out the kingpin, Fat becomes his ally, as a rival gangster declares a turf war of his own against the big guy.