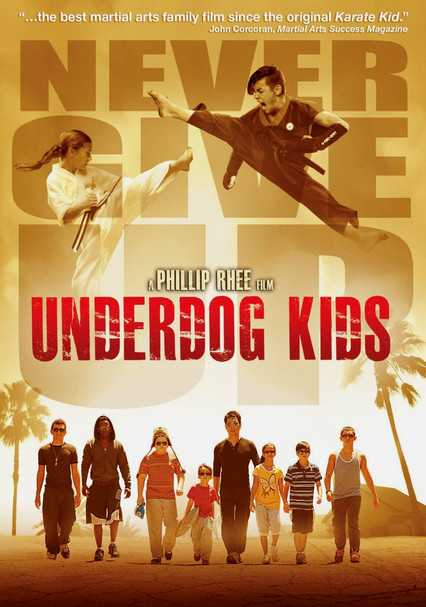 2014 PG 1h 34m DVD
It's a few weeks before the big karate tournament, and the struggling Mid-City Community Center has just lost their instructor. But when former MMA champ Jimmy "The Lightning Bolt" Lee (writer/producer/director/star Phillip Rhee of the BEST OF THE BEST movies) returns to the old neighborhood, he reluctantly agrees to train the misfit kids for their match against the undefeated Beverly Hills team.

Parents need to know that Underdog Kids is another sports film in the "David vs. Goliath" tradition. In this tale a ragtag bunch of down-and-out kids takes on the winning Beverly Hills martial-arts junior champs with the help of a former MMA (mixed martial arts) heavyweight trying to make a comeback. Filled with straightforward messages about responsibility, confidence, and hard work, the film also has plenty of stereotypes (angry African-American boy, a kid trying to overcome a stutter, an overweight boy fat-shamed by his dad, a struggling single mom, adorable orphans, bullies). Lots of martial-arts action plays throughout with no serious injuries, and there's bullying and some street fighting in which the coach overwhelms an entire company of toughs. Expect some colorful insults ("chicken butt"), a few swear words ("bulls--t," "piss"), and numerous loud farts.

Most of the fighting takes place in competitions; traditional martial-arts combat (falls, offensive and defensive maneuvers, holds). However, in two instances, impromptu fights are motivated by anger or bullying. Some bloody noses, bruising, and throw-downs. An overweight boy is bullied and attacked.