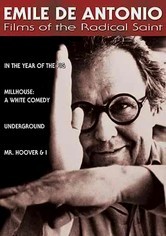 1976 NR 1h 28m DVD
Seized by the FBI as evidence at the time it was made in 1974, Emile de Antonio's tense documentary features clandestinely filmed interviews of the then-fugitive members of the notorious Weather Underground. Radicals Billy Ayers, Kathy Boudin, Jeff Jones, Cathy Wilkerson and Bernadine Dohrn sound off on their reasons for going underground and reflect on the trials of the fugitive lifestyle.