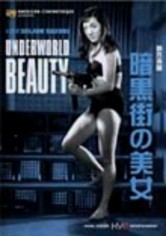 1958 NR 1h 27m DVD
Miyamoto is a former mobster who's just been sprung from jail and immediately has two orders of business he must take care of. First on his list is finding a priceless stash of diamonds that he hid before being locked up; his second task is to find the man who risked his own life to save the ex-con. Things don't go quite as planned, however, when a ruthless rival mob boss arrives to stir things up.