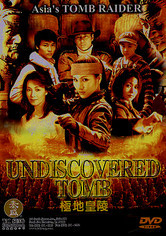 2002 NR 1h 31m DVD
Along the isolated border between China and India lies an ancient, hidden tomb thought to contain the treasured "Pills of Eternity." Archaeologist Ivy (Yoko Shimada) decides to gather a team to trek to the border in search of the mysterious objects. But before she can claim the prize, she'll have to face down the diabolical Wild Wolves. Sik Siu Loong is a standout in the film's breathtaking fight scenes.