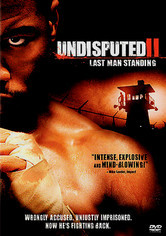 2005 R 1h 38m DVD
Heavyweight champ James "Iceman" Chambers (Michael Jai White) finds himself in jail once again in this sequel to the 2002 action classic. This time, though, the bars are in Russia -- at one of the country's most violent penitentiaries. Framed for a crime he didn't commit, the Iceman has no choice but to get back in the ring for a Russian Mafia-backed rumble with the big house's resident champ, Uri Boyka (Scott Adkins).