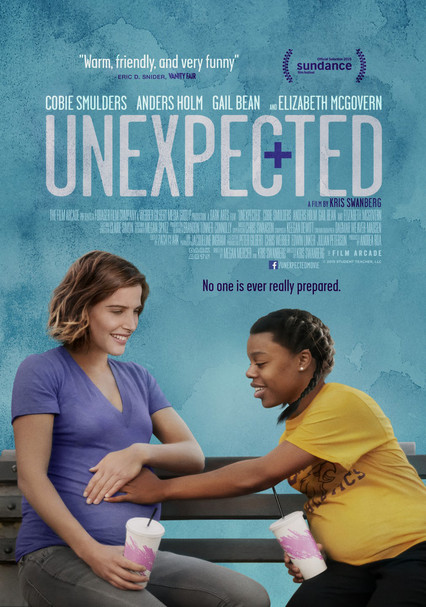 2015 R 1h 25m Blu-ray / DVD
Soon after high school teacher Samantha becomes pregnant, she discovers that star student Jasmine is expecting as well. Their already-close bond deepens as the women help each other come to terms with the sudden changes in their lives.

Parents need to know that Unexpected follows two women with very different backgrounds -- one's a high school teacher and the other is her student -- as they both deal with unexpected pregnancies and the impact that impending motherhood has on their plans and dreams. Expect frank discussions about the challenges faced by new mothers, no matter their situation, as well as moderately frequent swearing (including "s--t" and "f--k"), often by teens. Despite the subject matter, there's not much sexual content; a couple embraces and kisses while undressing each other (nothing graphic shown), and a woman is shown peeing on the toilet while taking a pregnancy test.

A couple embraces and kisses while undressing each other (nothing graphic shown). A woman is shown peeing on the toilet, taking a pregnancy test.

An unexpected pregnancy can definitely be a curve ball, disrupting your life plans. But that doesn't make it bad, though it may require some tough choices. Friendship can be found in unlikely places.

Samantha's Subaru is shown frequently. She visits a few well-known parenting websites, including Planned Parenthood and BabyCenter.com, on her Mac laptop. Characters are shown using iPhones, and a pregnant woman repeatedly shows a strong desire to eat Cheetos.