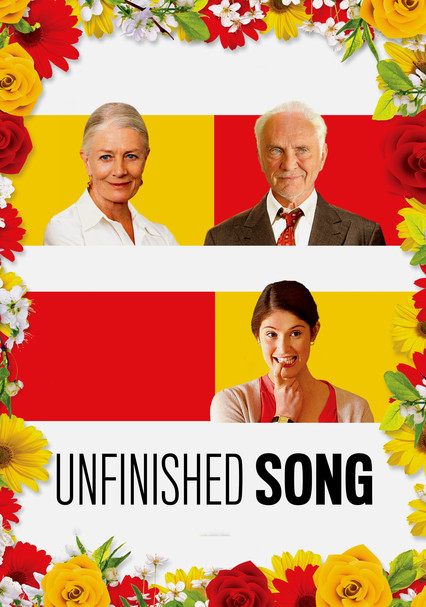 2012 PG-13 1h 33m DVD
With his wife Marion terminally ill, 72-year-old Arthur sees a future that's nothing but grim. But when he takes Marion's place in their church's very unconventional choir, he begins to find joy in life again.

Parents need to know that Unfinished Song is a heart-rending dramedy about an ill woman's quest to live a little -- and her husband's lessons on how to live at all, despite huge challenges. Because a central theme of the movie is facing imminent death from cancer, it sometimes gets too intense for younger kids, though teens should be able to handle it. There are many deeply sad and affecting moments, so bring plenty of tissue. Expect some innuendo, and some of the lyrics of the songs that Marion's choir sings (to an audience that includes kids) are raunchy. Dialogue includes words like "s--t" and "bloody," and there's some smoking and drinking.

Sexual innuendo. Songs about sex are sung by seniors in front of an audience that includes children.

Arguments sometimes gets loud. A son shouts at his father, and vice versa.

Occasional use of "s--t"; more frequent use of "bloody." A person shows someone the middle finger.

Life will defeat you sometimes, especially when it involves losing someone you love, but you shouldn't allow yourself to be defeated. Also, cancer shouldn't get the last word by robbing you of your ability to enjoy life and the things you love. Music has a way of paving over bumps in the road -- embrace it, and let it.

One character uses an iPod.

Drinking in a pub. One character smokes cigarettes.