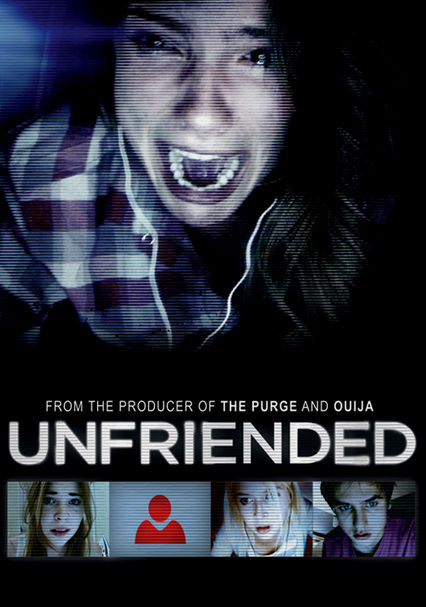 2015 R 1h 22m Blu-ray / DVD
A year after high-schooler Laura Barnes kills herself, the six classmates whose cyberabuse drove her to suicide look back on the tragedy. During their video chat, they realize that someone else is listening in -- someone with a lethal agenda.

Parents need to know that Unfriended is a horror movie that appears to take place almost entirely via computer screen, using Skype webcam chats, Facebook messages, text messages, YouTube videos, Spotify music, etc. (the products'/services' real brand names are constantly shown and used). All of the main characters are teens; some of them drink or smoke pot on camera, and there are references to past substance use. Language is extremely strong, with many uses of "f--k" and much more. There's also plenty of sexual innuendo, references to sex acts, and flirting -- as well as a near-striptease (shown via webcam), though there's no actual nudity. Teens die in gory ways, with blood splatters and other shocking images (hand in a blender, impalement, hot curling iron shoved in someone's mouth, etc.), and teen suicide is shown (via a gunshot to the head) and discussed. Amid all of the scares and edgy content, the movie does raise relevant issues related to cyberbullying.

Teens frequently talk about sex. Many have had sex or have experimented with each other. A near-striptease shown on a webcam. A sexy ad for "Free Live Cams." A shirtless male. Innuendo and flirting.

Moments of extreme gore; blood spatters. Teen suicide, via gunshot to the head, shown on a video. Dead teens. A hand in a blender. A hot curling iron shoved in a girl's mouth. A second gunshot to the head. Impaling on a huge knife. A video of a drunk teen girl who has defecated on herself.

May drive home the fact that anonymous posting online can be just as hurtful and damaging as physical bullying.

Teens smoke pot, drink, and get drunk. References to and photos of teens having been drunk or high on previous occasions. Reference to "roofies."