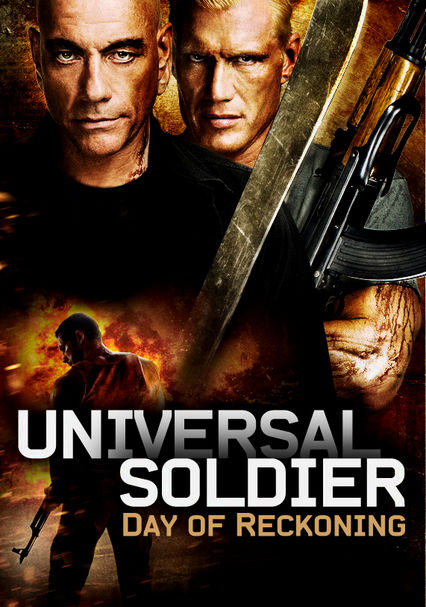 2012 R 1h 54m Blu-ray / DVD
As haunted soldier John gets closer to Luc Deveraux and the rogue army of genetically enhanced warriors led by Andrew Scott, he discovers more about himself and begins to call into question everything he believed to be true.

Parents need to know that Universal Soldier: Day of Reckoning is the fourth in the Universal Soldier sci-fi action movie series. Violence is extremely strong and over the top, with lots of dripping, spraying, and smeared blood, dead bodies, severed body parts, guns and shooting, and fighting (hand-to-hand, as well as with baseball bats and machetes). Several topless women and a graphic sex act are shown in an adult club. Language includes more than a dozen uses of "f--k," and super soldiers are seen gulping down bottles of whisky. Many fans of the franchise will be disappointed that stars Jean-Claude Van Damme and Dolph Lundgren only have small roles this time around and that the movie is far stranger and moodier than most action movies of its type, but it may appeal to more adventurous moviegoers.

Extremely strong martial arts violence. Lots of fighting (hand-to-hand, as well as with baseball bats and machetes), and the main character's wife is shot in the head; his daughter is shot as well, but the scene cuts just before anything is shown. Other brief instances of violence against women. Lots of blood: smeared, dribbling, and spraying. Viewers see a mangled corpse, and toes and fingers are chopped off during fights. A woman pounds a nail into a man's hand. There are guns and shooting; an elderly woman is shot and killed, and a man's head is blown off.

The movie suggests that a man will go much farther in order to fight for his family than he will to fight for his country. But this message is delivered in a very cynical fashion, and it all really boils down to revenge.

In a few scenes, super soldiers are shown gulping down bottles of whisky, though it doesn't appear to affect them at all. The female lead is shown smoking two or three cigarettes.