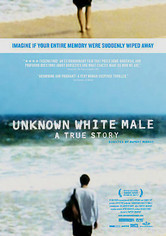 2005 PG-13 1h 27m DVD
Filmmaker Rupert Murray tells the true story of Doug Bruce, a man who woke up on a New York subway with no clues as to who he was, other than a random phone number and a British accent. Documenting Doug's quiet terror upon discovering he has no memory of his former life -- and his detachment when meeting friends and family he's known for years -- this intriguing film explores the true nature of identity.