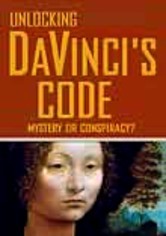 2004 NR 1h 0m DVD
This documentary based on Dan Brown's best-seller looks into the possibility that Leonardo Da Vinci may have encoded his artwork with hidden messages -- most notably in his two acclaimed works, the enigmatic "Mona Lisa" and the iconic "The Last Supper." Along with other interesting theories, Da Vinci apparently held the belief that there was more to the relationship between Jesus and Mary Magdalene. But are his theories based in truth?