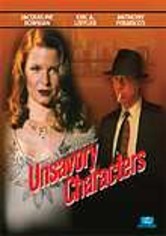 2001 NR 1h 27m DVD
When struggling pulp novelist Archer Royce (Eric Leffler) engages in a torrid affair with the sultry wife (Jacqueline Bowman) of a hard-nosed nightclub owner, he finds himself drawn into a deadly web of deceit, betrayal and murder. Filmed in both black and white and in color, director Richard Haines's stylish thriller draws inspiration from film noir of the 1940s and '50s. Anthony Peraticos and Michael Masucci co-star.