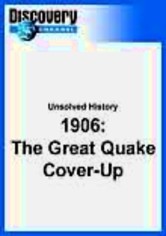 2004 NR 0h 50m DVD
On April 18, 1906, an earthquake measuring 8.3 on the Richter scale leveled San Francisco, killing 500, leaving thousands homeless and causing millions of dollars in damage. In this documentary, intrepid investigators reveal how -- and why -- the number of casualties was significantly underreported at the time. Part of Discovery Channel's "Unsolved History" series, which takes a forensic approach to some of history's most vexing mysteries.