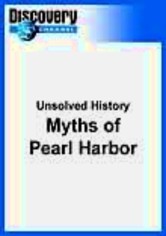 2004 NR 1h 30m DVD
Did you know that the first shots fired on the morning of December 7, 1941, at Pearl Harbor, Hawaii, came from an American destroyer nearly an hour &NFibefore&NFi_; the Japanese attack? The target: one of Japan's four secret "midget submarines," which were trying to penetrate the harbor netting. Learn more about this fascinating, little-known chapter of the "date which will live in infamy." Part of Discovery Channel's "Unsolved History" series.