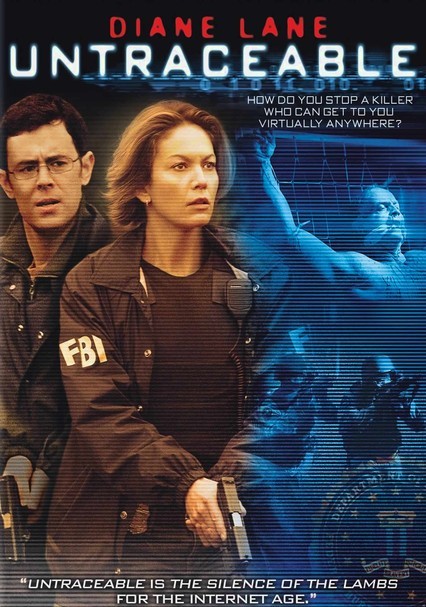 2008 R 1h 41m Blu-ray / DVD
In this tense thriller, cybercops find themselves grappling with a megalomaniacal, murderous psychopath who uses the Internet to show off his grisly handiwork, rigging his site so his remaining captives' fates depend on how many viewers it attracts.

Parents need to know that this violent thriller features several long, disturbing scenes of torture -- bodies are bloodied, burned, dissolved in acid, and nearly decapitated by whirling blades. Other upsetting scenes feature Tasering, shooting, and a threat against a young girl, as well as plenty of images of dead bodies. All of this is framed within an argument against easy access to images of violence and abuse via the Internet, but that doesn't make it any less disturbing. Language includes repeated uses of "f--k" and other profanity.

Incessant violence (on computer screens and "live") committed by the serial killer, who tortures victims in front of a Web cam. These scenes are bloody, loud, and variously creepy: one involves the death of a kitten, while others show poisoning/bleeding, burning by sunlamps, bodily immersion in a vat of acid, and suspension over roaring lawnmower-style blades. The killer uses a Taser to zap his victims unconscious. SWAT teams burst into a couple of suspects' homes. Frequent tense moments as characters make their way through dark shadows. Plenty of guns wielded by agents -- and shot at suspect. Repeated viewing of a graphic scene in which a man shoots his head off. References to terrorism and using the Internet to publicize violence. Verbal references to a cop killed on the job, and several references to sex-related crimes (soliciting children online, for instance).

The killer is angered by violence's exposure in the media and makes his viewers complicit in his crimes. Agents are frustrated, angry, and eventually triumphant.