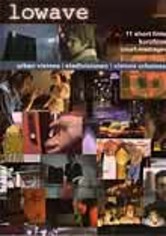 2003 NR 1h 31m DVD
Experience urban subcultures from a different perspective with this disc's 11 short, experimental films by artists from London, New York City, Paris and other places. Among these engrossing videos is a common thread that taps into the cities' rhythms. Selections include Push; One Last Thing; Fausse Solitude; Der Letzte Flug; Pako; Hi-Fi; Novanta; When the Floor Became the Ceiling; Raus aus Seinen Kleidern; Promenaux; and The Strip Mall Trilogy.