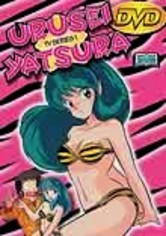 1981 NR 42 discs
In this out-of-this-world anime comedy series, notoriously unlucky Ataru Moroboshi is chosen at random by aliens and told that only he can save Earth by defeating their sexy princess, Lum, in a game of tag. Unaware that Lum can fly, girl-crazy Ataru agrees to play. Ataru's girlfriend Shinobi, hoping to boost his morale, agrees to marry him if he wins. But just as things are looking up for Ataru, Lum moves in with marriage plans of her own.