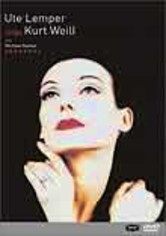 1992 NR 2h 30m DVD
International singing sensation Ute Lemper performs in German, French and English in this tour-de-force concert, recorded in 1992 at Paris' Les Bouffes du Nord. The versatile chanteuse -- whose style ranges from sultry to haunting -- wows the crowd with a variety of favorites. The set list includes "Lady in the Dark," "Knickerbocker Holiday," "Das Berliner Requiem," "Lost in the Stars," "The Firebrand of Florence," "One Touch of Venus" and more.