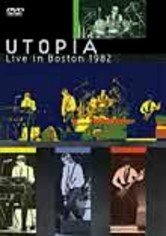 2004 NR 1h 40m DVD
This video features experimental rockers Utopia performing live in Boston in 1982. Todd Rundgren, Kasim Sulton, Roger Powell and Willie Wilcox show off the group's unique blend of progressive rock, electronica and new wave that made them standouts in the 1970s and '80s. The band performs more than 23 classics, including "Libertine," "Feet Don't Fail Me Now" and "Hammer in My Heart." A documentary features interviews with each band member.