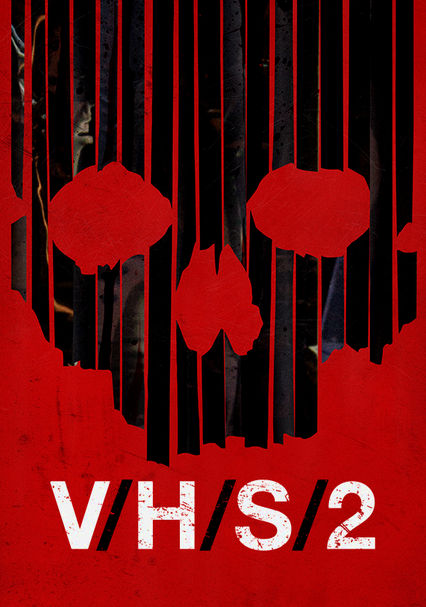 2013 R 1h 35m Blu-ray / DVD
Two private eyes investigating the disappearance of a student discover horrific content on a collection of VHS tapes in his home. But these videos don't just document evil ... they actually contain a very dark presence.

Parents need to know that V/H/S/2 is an anthology horror film that's a sequel to 2012's V/H/S, which did poorly in theaters but well on DVD/streaming. This installment has a largely new cast and crew, though it takes place in the same creepy house. Violence is very strong and gory, including disemboweling, mass suicides, failed suicides (and gaping wounds), ghosts, aliens, zombies, dead bodies, a dead dog, and huge spatters of blood. Two topless women are shown, and two sex acts (one of them is fairly hardcore, though it's very brief). Language is very strong in two of the segments, with multiple uses of "f--k" and "s--t," among other words. Teens drink alcohol in one scene during the final segment.

Two topless women are shown. A woman meets a man in a hotel room for sex; viewers see them kissing and undressing through the window. (The inference is that it's an illicit affair.) A woman has sex with a man to distract him from seeing a ghost. There's a quick shot, through a doorway, of two minor characters having what looks to be hardcore sex: The man's naked bottom is shown thrusting. A woman flirts with her boyfriend over the phone and uses sexual innuendo. A woman is shown to be pregnant from an illicit affair with her boyfriend's best friend. A teen girl starts to have sex with her boyfriend but is interrupted.

In the most intense sequence, a religious cult involves (off screen) sex with young girls, mass suicides (with guns and poison), bloody operations, zombies, and massive amounts of gore sprayed around. Another segment includes zombies attacking, ripping open people's bodies and devouring bloody entrails. Scary ghosts appear in another segment, and aliens attack in the final segment. In the wraparound segment, a man films himself trying to blow his own head off, but he fails, "merely" blowing off his jaw instead. His bloody, gaping mouth and tongue are shown hanging out. Nearly every character dies, including a cute little dog.

No messages here other than "don't go in the creepy house or woods, and definitely don't try to film yourself all the time."

Adult characters casually drink beer in the first segment, and teens drink liquor during a slumber party in the fourth segment.