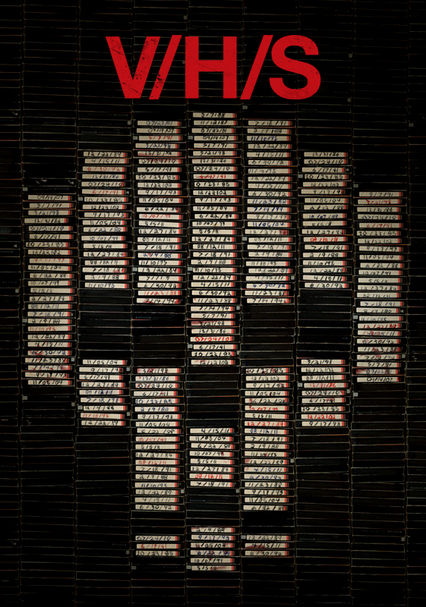 2012 R 1h 55m Blu-ray / DVD
Hired to steal a rare VHS tape from a secluded house, a group of petty crooks breaks in and discovers a corpse surrounded by TVs and stacks of tapes. Now they must watch each horrific and bizarre video as they search for the correct one.

Parents need to know that V/H/S is a horror anthology film that's dedicated to the concept of shooting quickly and simply on home video, so almost all of the segments are shown from the point of view of a character with a camera of some sort. There's lots of graphic horror violence, with plenty of slashing, slicing, gore, and dead bodies, as well as spooky stuff. There's also some nudity (breasts, bottoms), sex, and heavy innuendo. Characters also drink heavily, snort cocaine, and smoke pot, and language is very strong, with many uses of "f--k," "s--t," and more. There will be no keeping teen horror fans away, but it's recommended for 17 and up.

Several young men bring two drunken women back to their hotel room with the express purpose of having sex. One woman passes out in the midst of foreplay, and one of the men starts to have sex with the other; it's interrupted when she turns into a murderous beast. The vampire girl is shown almost fully naked. Viewers also see clips from a homemade sex tape that's been recorded over, with nudity. (The woman doesn't know she's being filmed.) A team of pranksters pulls a girl's top off and films it for posting on the Internet. One breast is shown several times. A married couple tries to seduce each other in a hotel room. Also other examples of topless females, naked male behinds, and strong innuendo.

A girl turns into a monster and attacks a roomful of young men. Though much of the biting and slashing takes place off screen, some of it is visible, and the bloody aftermath is shown in full view. A character is stabbed in the throat with a knife (complete with gurgling blood). An arm is broken, with bone protruding. A girl digs around in her forearm with a sharp instrument while trying to remove a foreign object. And lots more stabbing, slicing, dead bodies, severed body parts, blood, and gore. Also vandalism.

Bad things happen to both good and bad people; it's just random horror. Nobody becomes a better person, and no lessons are learned.

In one of the segments a group of young men and women gets seriously drunk and also snorts some cocaine. In another segment, young people smoke pot. It appears that these characters are mostly in their early twenties, not teens.