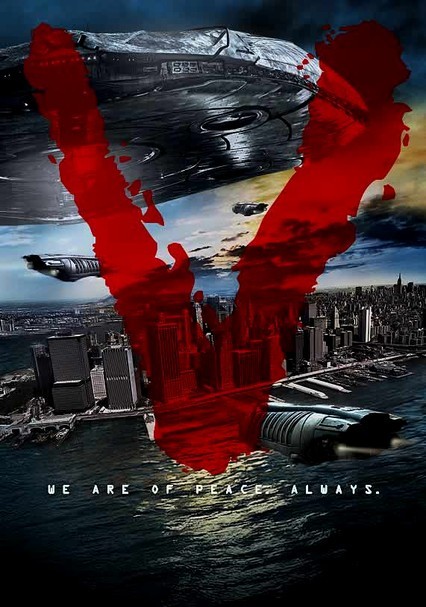 2009 TV-14 2 seasons
This update of the 1980s series "V" follows the valiant exploits of Erica Evans, an FBI agent trying to expose the sinister truth behind the ostensibly peaceful overtures of the Visitors, a race of aliens whose ships have encircled the globe.

When Earth inhabitants have their first encounter with an alien race, Homeland Security agent Erica Evans uncovers disturbing details about the Visitors. She joins a resistance movement to thwart the aliens, even as they recruit her son as their spy.

The second season of this dynamic reboot of the 1980s miniseries "V" continues with counterterrorism agent Erica Evans delving deeper into the mysteries surrounding the Visitors, an alien race hiding a secret agenda behind offers of friendship.

Parents need to know that this remake of the same-named 1980s miniseries centers on the arrival of a group of alien Visitors who claim to have only the best of intentions but actually have a hidden agenda. As their real goals become clear, a resistance movement starts fighting back -- so you can expect some fighting (sometimes intense, with small explosives, knives, etc.), as well as minor swearing and some suggestions of human-alien romance. Various forms of torture are also implied. Several main characters are placed in situations where they must make tough choices -- to stand up for what's right or to abandon their principles and sell out the human race for personal gain.

Some intense fight scenes involving small explosives, crowbars, fists, knives, guns, and other objects of mayhem that leave some characters with deep slash wounds...or dead. Some implied torture, to both human and alien characters. Some deaths are sudden and violent.

Despite the fact that the show revolves around invasion and oppression, the series demonstrates why it's important to judge people not by what they say, but by what they do.