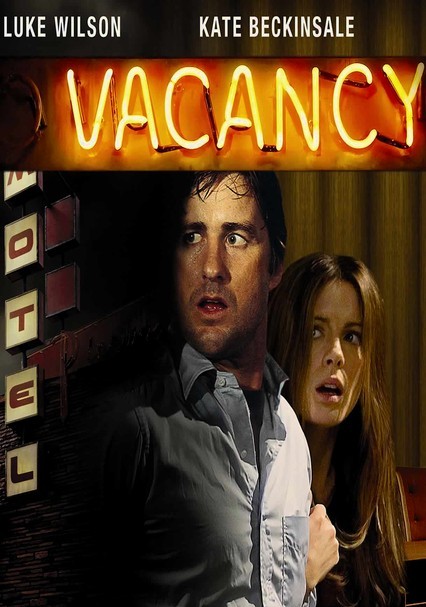 2007 R 1h 25m Blu-ray / DVD
A young couple stranded at an isolated hotel with a lone desk clerk are shocked to find that their room is wired with video equipment -- but their anger turns to terror when they realize that they could become the star attractions in a snuff film.

Parents need to know that this horror movie isn't for kids, even those who like star Luke Wilson based on his romantic comedies. The violence is bloody and, once it starts, incessant. The prelude is even worse (snuff tapes show horrific attacks on victims with big knives, with screaming women's breasts exposed). The female lead takes prescription pills to combat depression; language includes lots of "f--k"s and plenty of other swearing.

Brief discussion of a child who died before the film begins. Horror and chase scenes include scary pounding, a jump scene, and repeated efforts to inflict brutality. Snuff tapes are horrifically violent, bloody, and stark; they're left in the motel room to generate fear in victims to be; violence includes stabbing, neck cutting, kicking, hitting, and car smashing; bloodcurdling screams emerge from behind an office door (presumably from a TV); weapons include knives, a cable, and a six shooter. A horrified woman watches from a hiding place as her husband is stabbed.

Murderers are brutal, mostly silent, and implacable; protagonists are surly at first, then generous in their efforts to save each other.

References to David's use of "trucker pills" to stay awake and Amy's prescription medication (Zoloft, Prozac); viewers see her take a pill, which causes her to fall asleep while hiding.