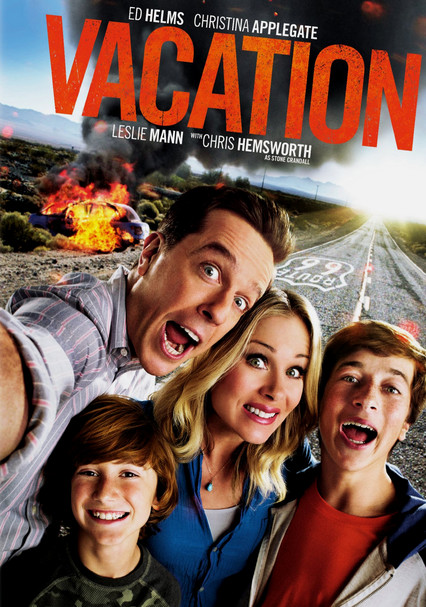 2015 R 1h 39m Blu-ray / DVD
Centering on the next generation of the Griswold clan -- headed by the now-adult Rusty -- this reboot of the popular franchise follows their disaster-plagued pilgrimage to experience the wonders of Walley World.

Parents need to know that Vacation is a sequel to/reboot of the original National Lampoon's Vacation comedies. Ed Helms stars as a grown-up Rusty Griswold, who hopes to recreate the infamous road trip his own family took when he was a teen. Like the 1983 version, this Vacation is chock full of crass humor, coarse comments, sexual references, and constant strong language. Nearly every line of dialogue includes an obscenity -- from "motherf---er," "f--k," "s--t," "a--hole," and "bulls--t" to "p---y," "d--k," and more. Violent moments/topics are played for humor (like siblings roughing each other up, a fist fight between families, a woman in a car getting killed by a truck, jokes about rape, pedophilia, incest, and more), and sexual content includes glimpses of bare breasts, scenes in which a man's large genitals are clearly outlined by his underwear, tons of crude innuendo and graphic references, and a scene of several partially nude couples waiting to have sex in public. One scene includes a mom chugging beer and then projectile vomiting while running an obstacle course.

Nudity and several references to sex, promiscuity, groping, and sex acts. A married couple attempts to have sex several times but is foiled, including once when they try to have sex publicly but are met with other couples also waiting to have sex (or in the middle of it). Quick glimpses of breasts. The outline of a man's extra-large penis is visible through his boxer briefs. Friends recall how a woman was known for "doing anything" (like performing sex acts on an administrator). A teenage boy means to ask a girl if they can kiss on the lips but inadvertently asks for a much more explicit act (he was told it meant "kissing with mouths closed"). Dirty talk like "I'm gonna pound the s--t out of you," "Why don't you plug up your ears with Mitt Romney's d--k?," etc.

Kevin tackles and punches his older brother, James, and repeatedly puts a plastic bag over his head. The Griswolds end up in a fist fight with another family. Jokes about a trucker being a rapist and a pedophile. A man with a death wish ends up killing himself while rafting. A woman in a car is killed by an oncoming truck on the highway. Rusty runs over a steer with an ATV and ends up with blood on him. Most of this is played for humor.

Amid the crude/over-the-top content are some messages about steadfast marriages and the idea that vacations form lasting impressions on kids.

Adults and college students drink, and in one scene the mom chugs a pitcher of beer to do a "Chug and Run," resulting in her projectile vomiting throughout the obstacle course. Adults also drink wine at meals.