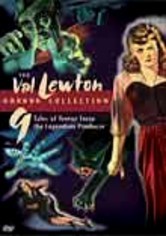 1943 NR 2h 27m DVD
Famed RKO Radio Pictures producer Val Lewton managed to single-handedly redefine the horror genre in the 1940s, cranking out low-budget, high-volume box office hits that rarely disappointed audiences -- or studio execs. This double feature of I Walked With a Zombie (1943) and The Body Snatcher (1945) -- the latter of which stars Bela Lugosi (aka Dracula) -- is the second installment of a five-part collection of Lewton's work.