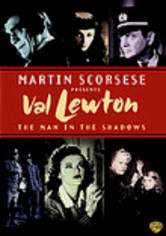 2007 NR 1h 27m DVD
Hollywood producer Val Lewton managed to take low-rent B-movie projects assigned to him by the studios and crank out expertly crafted atmospherically charged fare, such as Jacques Tourneur's Cat People and Robert Wise's The Body Snatcher. The story of this lesser-known film figure and his collaborators is remembered fondly in this mix of biography and film survey, narrated by iconic director Martin Scorsese, who produced the documentary.