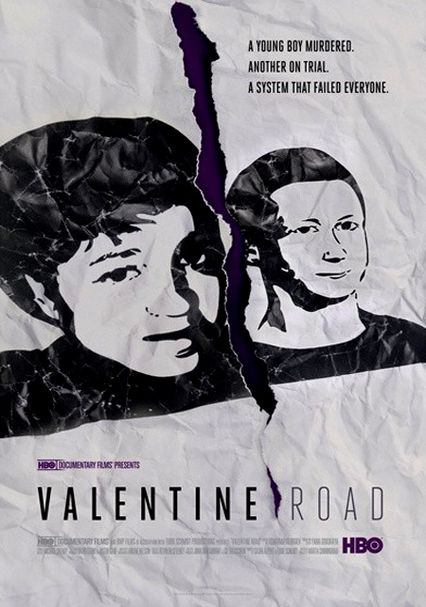 2013 NR 1h 29m DVD
This powerful documentary examines the murder of a gay eighth-grader by his California classmate in 2008, exploring the tragic lives of both the killer and his victim, as well as the aftermath of the shocking crime.

Parents need to know that Valentine Road is a documentary about the murder of a child by another child with the crime linked to issues of sexual and gender identity. The murder is described very graphically, and viewers see crime-scene photos with the victim's clothing streaked with blood and gore and the victim's head with two bullet holes in it. We also see the other victims of the crime, including students who witnessed the shooting and the guardians and parents of the murdered boy and the murderer himself; some of the interview footage is very emotional and disturbing. There are descriptions of drug addictions, child abuse, and gunplay that resulted in injuries. Some of those interviewed express strong opinions, positive and negative, about transgender and gay people.

Many discussions of sexuality and gender.

The film centers around a brutal murder, which is graphically described; the viewer sees photos of the crime scene, with blood and gore and the victim's clothes smeared with blood.

The film describes a terrible crime, but those affected by it are able to reap lessons about tolerance and the perils of guns and drugs.

Footage of real-life celebrities such as Dr. Phil and Ellen DeGeneres.

Discussion of drugs such as crystal meth and alcohol; the viewer sees the terrible consequences of addiction.