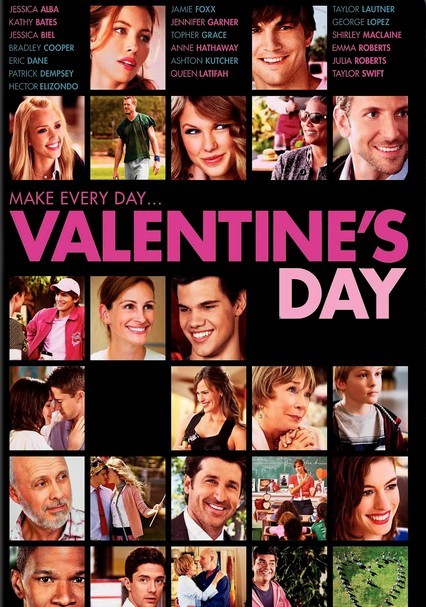 2010 PG-13 2h 5m Blu-ray / DVD
In this Los Angeles-set comedy from director Garry Marshall, the tripwires of modern love are exposed in a carousel involving relationships and the single life on the most romantic day of the year: February 14.

Parents need to know that Valentine's Day is an ensemble romantic comedy from director Garry Marshall -- which stars everyone from Julia Roberts, Jennifer Garner, and Anne Hathaway to teen faves Taylor Lautner and Taylor Swift -- that features relationships in various stages, from sweet childhood crushes and hormone-driven teen matchups to confusing adult connections and mature, enduring love. Characters kiss, teens talk about having sex, unmarried couples are seen in bed together, and a man cheats on his wife. There's a sense that you're incomplete without a partner, and that finding true love isn't easy ¿ and yet everything has a fairy-tale feel in the end. Expect some swearing (including "s--t") and a few raunchy conversations.

Two teens discuss their plans to meet at lunch and have sex for the first time. The teenage boy is shown naked, with a guitar hiding his genitals. Couples kiss, sometimes in bed wearing little clothing; women's legs peek out from beneath bedcovers. One character works as a phone-sex attendant, and viewers hear her raunchy conversations. A married man cheats on his wife, and his girlfriend has no clue that he's "taken." A man is shown getting out of the shower and walking around in a towel.

Though the film portrays many kinds of love, there's a particular emphasis on romantic love, and those who lack it seem bereft. One portrayal of mature love, though needing exploration, is surprisingly complex.

It's hard not to notice that many characters are toting BlackBerrys. ESPN is name-dropped.