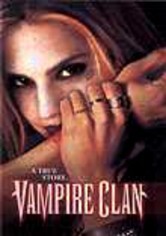 2002 R 1h 26m DVD
This tale of suburban horror (based on a true story) follows five extremely misguided teens who, proclaiming themselves the Vampire Clan, feed on one another's blood in an attempt to become real vampires. When the quintet is apprehended, their disturbing saga unfolds via flashback. After their leader (Drew Fuller) gets them to help murder his ex-girlfriend's parents, the group hits the road -- and soon realizes they're in over their heads.