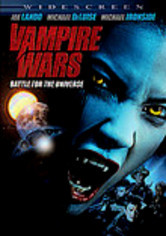 2005 NR 1h 39m DVD
Aboard the "Vampire Sanitation," aka V-San, vessel Heironymous, an unsuspecting band of vampire exterminators led by Churchill (Joe Lando) and Damian (Dominic Zamprogna) have no idea they're walking into a dastardly and deadly trap set by the powerful vampire Muco (Michael Ironside). But this is a futuristic universe, where the vampire problem has grown so serious that intergalactic authorities need to ensure Muco is destroyed.