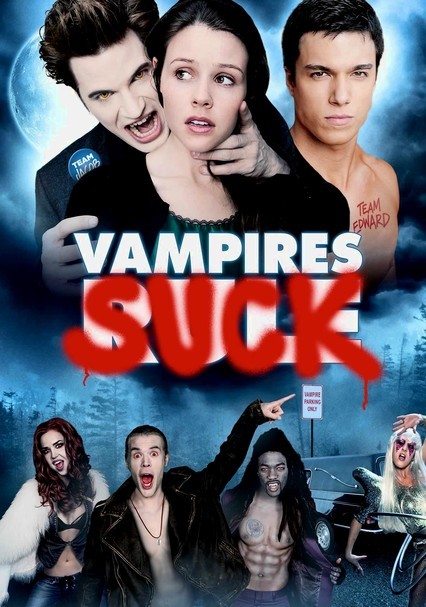 2010 PG-13 2h 0m Blu-ray / DVD
From the creators of Disaster Movie and Meet the Spartans comes a spoof of pop culture and teenage vampire movies starring Jenn Proske as Becca, a high schooler who must choose between two hunky boys who both have killer smiles. While surrounded by vampires, werewolves (wereChihuahuas, anyone?) and gossipy teens with their own romantic dilemmas, the neurotic Becca also copes with her overprotective father and the school's impending prom.

Parents need to know that Vampires Suck is a very lowbrow spoof of the Twilight films from the makers of previous lame parodies like Disaster Movie and Meet the Spartans. It's rated PG-13 but pushes the boundaries of that rating with it's frequent (albeit cartoonish) violence, sexual obsession, and language (there's one "f--k" and several "s--t"s). Teen boys who are sick of Twilight might find some perverse pleasure in seeing it skewered, but the satire here isn't very smart or funny, and there's little of value.

In one scene, Becca decides that she's going to "hump the s--t out of" Edward. She leaps on top of him, kisses him, nibbles his neck, and removes his "chastity ring." She also appears in a leather "dominatrix" outfit (including flashing red lights on the bra). But they're interrupted before sex can actually happen, and there's no nudity. In another scene, Edward touches his penis through his jeans. He also strips naked; his genitals aren't visible, but there's a shot of his "saggy" buttocks (the punchline of a joke). References to another character's required shirtlessness. Becca's dad comments on the size of her breasts.

Lots of highly exaggerated, consequence-free violence and spurting blood played for cartoonish comic effect. In one scene, a character has a broken arm with a protruding bone. A vampire sucks a character dry (her skin shrivels up). Another character has his arms, legs, and head ripped off. Characters beat each other up with fists, feet, knives, shovels, baseball bats, and whatever other weapons happen to be handy. A character pulls a gun and shoots a girl in the woods. A character "juggles" a baby in another scene. Characters are kicked in the crotch.

As in the Twilight films, the theme here involves overwhelming, passionate romance that borders on obsessive and is at the expense of everything else. Beyond that, there's no evidence of mutual trust or friendship. Instead, characters are mainly interested in sex, ridiculing others, and stereotyping.

The characters regularly display and use name brands, such as Facebook and Twitter, Slurpee, Cheetos, Count Chocula cereal, and Tampax. Edward rides a Segway. The movie directly references the real Twilight films and author Stephenie Meyer, and there are endless pop culture references to celebrities like the Kardashians, the Black Eyed Peas, the Jonas Brothers, Taylor Swift, George Clooney, and more.

Some teens are seen drinking at the prom. A teen character hurls a bottle of champagne from the back of her rented limo.