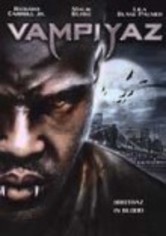 2004 R 1h 23m DVD
Jakeem (Richard Carroll Jr.) has spent years holed up in prison, away from the only home he knows, his gritty neighborhood. So, when he's finally released after his eight-year stint, he can't wait to get back to the streets that are so familiar to him. He worries that they'll be littered with urban decay, but what he finds instead is a menace far more horrific than he ever imagined: Vampires have taken over, and his neighbors are dying in droves.