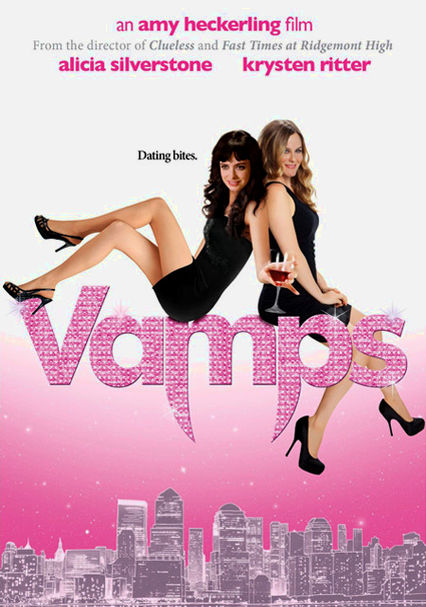 2012 PG-13 1h 33m Blu-ray / DVD
Two sassy female vampires live the high life in New York until love enters the picture, forcing each to make a choice that will jeopardize her immortality. Have hundreds of years of dating and partying finally taught these two how to find Mr. Right?

Parents need to know that Vamps is a paranormal comedy about twentysomething vampire BFFs who must navigate the challenges of being young decade after decade. Gen X parents will be drawn to director Amy Heckerling's reunion with her Clueless star Alicia Silverstone, but teens into the whole vampire genre might be interested, too. Expect occasional strong language (one "f--k," plus "s--t," "a--hole," "bitch," etc.) and several kissing scenes -- one that leads to a love scene and a pregnancy. The violence is mostly comical, but there are a couple of decapitations and some cringe-inducing scenes of the vamps drinking rats' and pigeons' blood. Adults drink at clubs, and one guy does cocaine (off camera) on a date.

One love scene in which a couple makes out on a bed, takes off their shirts, and are then shown in the "afterglow." Also several kissing scenes.

Most of the violence is comical but cringe-inducing -- like when the girls drink the blood of rats and pigeons (they squeeze them like juiceboxes or stick straws in them). A man's dismembered body (including his decapitated head) is revealed, but it's not really scary (it's very fake looking). A vampire is killed, decapitated, comes back to life, and then is finally killed once and for all.

Vamps seems to be obsessed with the topic of aging and how it can bring wisdom, along with nostalgia. Unconditional friendship and love despite age differences are also explored.

Apple products are mentioned, but otherwise, no overt product placements.

A guy snorts coke (off camera, but viewers see him pinching his nostril, and he later has a nosebleed); people in bars drink cocktails and smoke cigarettes.