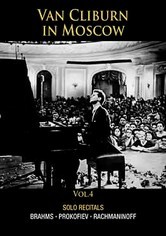 1960 NR 1h 26m DVD
The fourth in a series of programs capturing American pianist Van Cliburn's rare performances on Russian television, this installment features footage from concerts filmed live at the Great Hall of the Moscow Conservatory in 1960 and 1972. Selections include Brahms's "Handel" Variations, op. 24; Prokofiev's Sonata no. 6 in A Major, op. 82; and the original version of Rachmaninoff's Sonata no. 2 in B-flat Minor, op. 36.