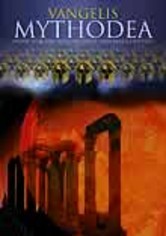 2002 NR 1h 16m DVD
Composed by Vangelis, "Music for the NASA Mission: 2001 Mars Odyssey" features world-renowned sopranos Kathleen Battle and Jessye Norman (at the top of their form), a 120-member chorus, members of the London Metropolitan Orchestra and Vangelis himself performing on electronic keyboards. "Mythodea" was staged for television as a thrilling live concert event in the ancient open-air setting of Athens' Temple of Zeus in June 2001.